Apply for funding to explore the environmental response to hydrogen emissions.

Apply for funding to explore the environmental response to hydrogen emissions.

Projects must start in October 2022 and last no longer than 24 months.

Normal individual eligibility applies and detailed information can be found in section c of the NERC research grant and fellowships handbook.

NERC values equality, diversity and inclusion across all its funding programmes, and actively encourages proposals from diverse groups of researchers.

UKRI research and fellowship grants for all schemes may be held at:

You may be involved in no more than three proposals submitted to this funding opportunity. Only one of these may be as the lead principal investigator.

Sub-contracts are eligible for costs on proposals submitted to this funding opportunity but should only be used for the procurement of goods and services.

Sub-contracts are not permitted for research partners providing intellectual input into the project, where a research partner or project partner relationship is more appropriate.

No studentships will be allowed under this opportunity.

What NERC is looking for

An anticipated six awards across the three topics will be funded.

Projects must start in October 2022 and last no longer than 24 months.

Learn how your business can reduce your costs of doing business internationally and improve your return on investment. 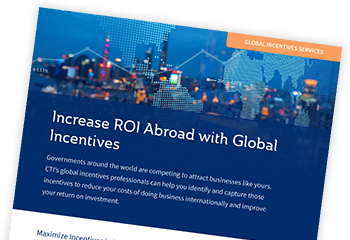 When we went through our first year with CTI we had an 89% completion rate, to me that’s unheard of...their team is dedicated to working with us and they are trying to maximize your tax credits.

Reach out to a tax consultant to learn how CTI powers your business for success.

OPEN   UK registered organisations can apply for a share of up to £25million for game-changing and commercially viable R&D innovation that can significantly impact the UK economy. This funding is from Innovate UK, part of UK Research and Innovation.