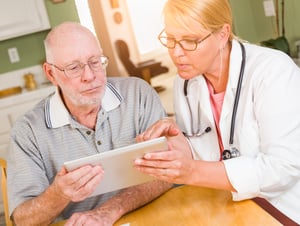 My 71-year-old mother called me the other day. The conversation began something like this:

“I need help. The computer.”

“I have a paper open…well, I have three pages of paper, but I can see all three at the same time, instead of pulling that bar-thingy on the side to see them. And I can’t do anything. What did I do?”

The “paper” to which she was referring was a Word document. She had a three-page Word document open and inadvertently changed the screen view to “Read Mode,” and “Side-to-Side” orientation.

I suspected as much, but when I asked her to click on the “View” in the menu ribbon to fix it, that tab was apparently missing. Or was it? This wasn’t going to be easy. Or quick. After more than an hour of my life lost to family tech support, I had her up and running again.

Ah, technology. For some older folks, it’s like oil to their water. They just don’t mix. But many tech startups don’t see it that way. New tech companies see potential and vitality in the senior market.

The older generation numbers will spike in 2030 when all Baby Boomers will surpass age 65.1 The estimated senior population just in Boston is expected to double within that time frame to hit 130,000.2  More mature and elderly people in the world means market growth potential for services.

So exactly how are tech startups aiding the elderly?

One company has partnered with healthcare providers to help seniors navigate their Medicare plans and deliver technical assistance.

Another has enhanced medical alert devices with a waterproof product that doesn’t require charging and will send preemptive alerts when the device detects concerning behavior from the user.

And now hearing aids are getting  challenged from a business that has developed wireless headphones that grant assisted living residents targeted, more sound-specific hearing, with less background interference.

Then we have a company that has looked beyond the elderly's more obvious needs and right into a virtual world. This company hopes to expand seniors' often limited mobility with virtual reality excursions, to places they’ve never been and old haunts they’d like to visit again.

Other startups are focused on helping those who help seniors, such as creating mobile platforms for senior-care training and digital apps that provide real-time, on-demand healthcare staff scheduling.

But many startups aimed at the senior market only attract around 0.7 percent of venture capital, according to Seth Sternberg, the CEO of Honor. His startup provides custom homecare for seniors. Sternberg admitted that he “found some obstacles” for their Series A investments in 2014.

Even though the market is ripe and bountiful, investors appear to question the potential. In lieu of external funding, these startups can look to the federal research and development (R&D) tax credit for help.

And recently in 2016, a tax provision granted startup companies that do not yet pay income tax the opportunity to offset their corporate payroll taxes – which can add up quickly with skilled researchers and developers on staff.

Startups can qualify for up to $250,000 in credit each year if they’ve produced less than $5 million in gross receipts for the year in which they are claiming the credit. With this, new tech businesses have the opportunity to optimize their tax-saving potential.

Install Tech and Tax Credits for the Twilight Years

Technology hasn’t left our aging population behind. The industry is leveraging its potential to help seniors make the most of their biggest birthdays. And R&D tax credits can load tech startups with significant savings to help their companies soar to new heights.

For maximum tax savings, startups should partner with a tax professional who can help them process the details and troubleshoot errors that may arise.